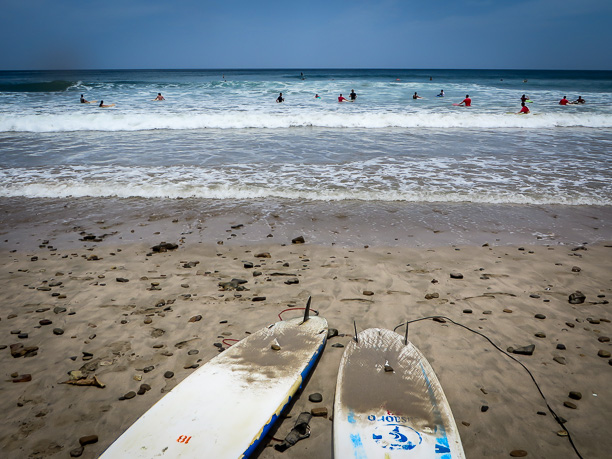 The big draw for SJDS is the surfing. Neither Randy nor I are surfers, but we figured this was a good opportunity to give it a try. Still in the spirit of pretending to be 20-something backpackers, we decided to forego the taxi and join some friends on the hostel shuttle to Playa Maderas. Now when I say shuttle, really I mean a pick-up truck with some bars around the box and a bench on either side. I got on last so I got to sit right at the back of the box, holding on for dear life while being tossed around as we bounced down the single-lane gravel road on the 30min drive to the beach.

Read More: Check out this great guide to the best hostels in Nicaragua for more! 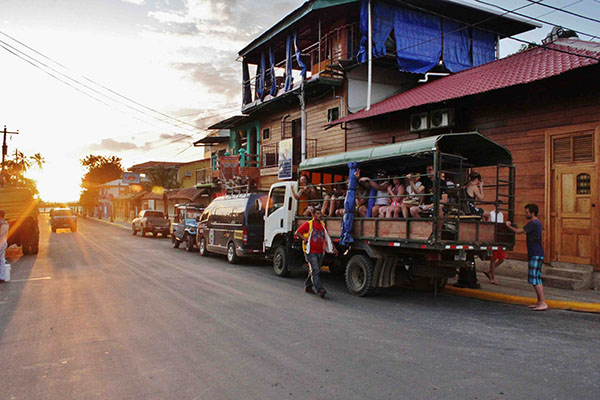 I arrived at the beach in one piece, with only a small scratch on my hand from one of the tree branches that brushed up against the truck along the way. The driver unloaded my rental surfboard and carried it to the beach (the boys had to carry their own boards). I eyed up a lesson going on down the beach and figured it looked simple enough; paddle, paddle, paddle and then when the wave catches you, jump up onto two feet. Playa Maderas is quite a popular spot so I figured the trickiest part would be to claim my spot in the water. The waves were crashing into shore with a low enough intensity that I felt it was a good time to give it a try. Board in hand I swaggered into the ocean, pretending to look like I knew what I was doing. The only problem was that this time of year the tide comes up so high that there is a 5-6ft span of rocks to walk over before hitting a sandy bottom. As soon as I stepped on the first patch of rocks I jumped, dropped my board, and any hope of looking like a seasoned surfer was gone. 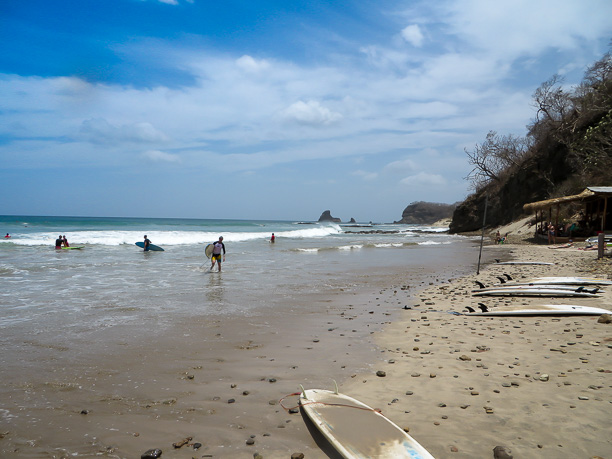 One of the reasons Playa Maderas is a popular surf beach is due to the fact that the drop-off is quite gradual so you can walk out quite a long ways while holding onto your surfboard. Since I’m only 5’ tall I couldn’t go quite as far as many of the other people, but it was much better than having to paddle out. It took a little bit of practice to navigate the incoming waves as I was trying to go in the opposite direction, but I got the hang of it. Just as the wave was coming I would lift up the front tip of the board, and then jump on as it crested the wave. I seemed to swallow the least amount of seawater this way.

After nearly throwing up a couple of times from snorting half the ocean up my nose, I finally did it!! I managed to ride a wave into the shore, on my feet!! It is not nearly as easy as the lesson made it look, and the multitude of people all vying for the same waves made it exponentially more difficulty (at least that is my excuse), but I was successful. I tried a few more times, managed to ride some waves up on one knee, and then decided it was time for lunch.

Lunch was over-priced tacos at one of the little restaurants on the beach, and then a long linger as we watched the tide come in and the surf increase in size and intensity. Finally we all slowly got up, grabbed our boards, and went out for a second attempt. The second time I didn’t last very long. The waves were much bigger than when we had first arrived, and they just kept coming! After struggling for about a half hour just trying to get out far enough to ride a wave back in, I got caught by a big wave that brought me all the way into shore on my board. I decided it was a sign to be finished, plus I didn’t want to have to walk over the rocks again. I grabbed a water, lathered on some sunscreen, and sat and watched everyone else get beaten up by the waves, thankful that I was no longer one of them. 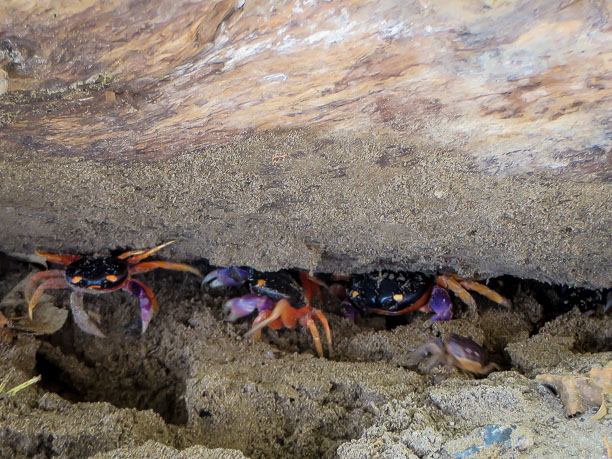 Halloween crabs – these little guys were so cute. They made me wish I had my girls with us!

As much as I love the beach, and the ocean, I have decided that I don’t love surfing. I don’t dislike it, and I would like to give it a try again someday, but it’s not my favourite! Battered and bruised we all climbed into the “shuttle” for the drive back to town. As we were leaving a few young 20-somethings were complaining about how expensive the $12/person hostel was. Although my younger body would have fared better with surfing, I was glad I was only pretending to be a 20-something backpacker for the weekend, and that I was going back to a hotel with A/C and more importantly, a hot shower! 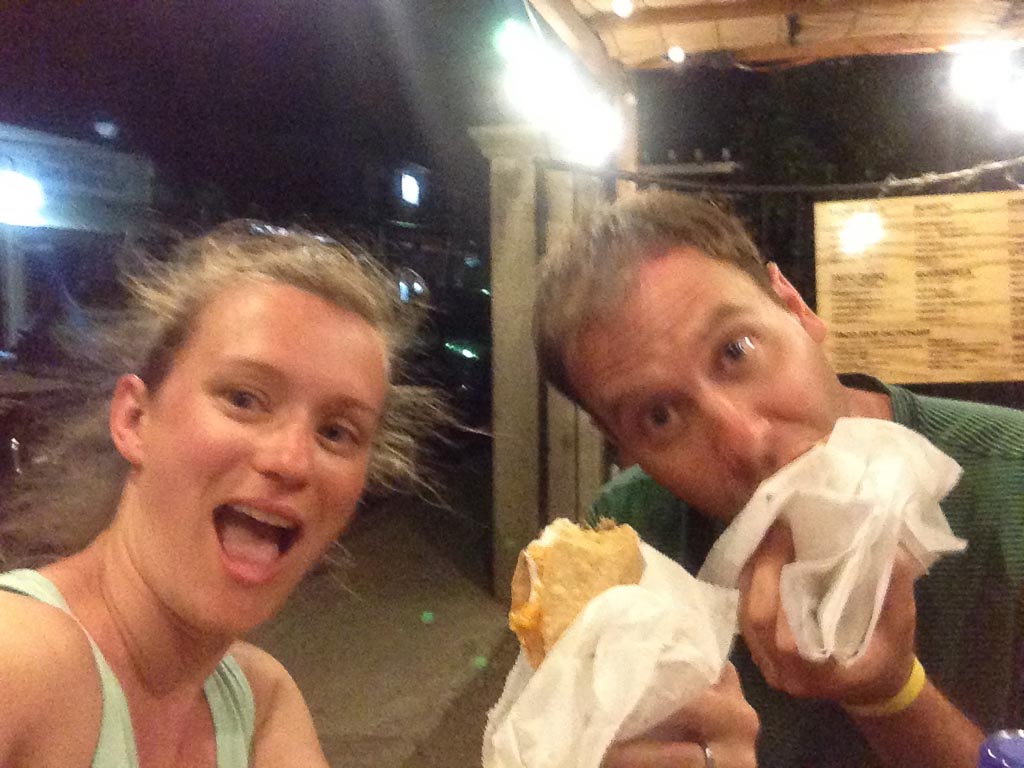 Pretending to be a 20yo backpacker