A visit to the Dead Sea has been idealized and portrayed as a wondrous experience that everyone will enjoy! Pictures of happy people reading books while floating in the Dead Sea abound on social media. While I often don’t trust everything I see on social media, it seems like everyone always has a good time. And while it’s super cool to float so weightlessly in the water, this doesn’t come with some very real downsides, especially if you’re visiting with kid.

Luckily for us, we’d previously visited the Aral Sea in Uzbekistan, so we were under no disillusion as to how the experience would likely play out.

Would we slather ourselves up with Dead Sea mud? Probably!

Make our way into the sea for an insta-worthy family picture? Likely!

Shed a few tears over salt in our eyes, ears, stingy cuts on our legs and nether-regions that are apparently sensitive to salt? Absolutely!!

Now, I know I’m not making this sound amazing, but it is do-able. It’s possible to visit the Dead Sea with kids and actually have a good time. Just make sure you & your kids are well prepared ahead of time by having a read through this amazing guide!! (smiley face!)

Fun Facts About The Dead Sea For Kids

Three Ways To Visit The Dead Sea With Kids

There are basically three ways to visit the Dead Sea in Jordan; 1. at the public beach, 2. with a day-pass to a resort, 3. as an overnight guest at one of the Dead Sea Resorts. Read on to decide which option is best for you!

The public beach aka The Amman Tourist Beach, is just south of the resort area along the King’s Highway. It’s relatively well taken care of and looked clean when we passed by. There are locker rooms, fresh water showers, a swimming pool and even a restaurant, so it really does have everything you need to enjoy a day at the beach. As with everywhere along the Dead Sea in Jordan, you’re not allowed to bring your own food and are forced to purchase something on site if you get hungry. You CAN bring in fresh water though, and I highly recommend you do this!

The cost to visit the tourist beach is 20JD ($40 CAD) per adult and 10JD ($20 CAD) per child. However, you still have to pay for towel rentals, lockers and mud if you want to slather yourself into a mud-monster. All these costs can add up and make it a relatively expensive experience.

* Expert tip – SKIP the Tourist Beach and head to one of the Dead Sea Resorts instead.

2. Purchase A Day Pass to The Dead Sea Spa Hotel

If you don’t have the time to spend the night by the Dead Sea I’d recommend purchasing a Day Pass for one of the resorts. The Dead Sea Spa Hotel is the cheapest and offers great facilities. At 25JD ($50 CAD) per adult it’s marginally more expensive than the tourist beach, however kids under 12 years are free! (We only paid 20JD per adult, but their website now states the rate is 25JD, I honestly think you can do a bit of negotiating when you pay!). Moral of the story, it actually ends up CHEAPER!!

The day pass rate doesn’t include towels or lockers, but it does include comfortable loungers with umbrellas. You likely won’t need a locker if you don’t bring your valuable with you. We left our valuables locked in the car and felt perfectly safe leaving clothes, towels and a water bottle on our loungers while we went to float in the sea. I suggest carrying your phone in a waterproof phone case because you’ll definitely want it to document the moment (or two) you’re floating in the water!

*Expert Tip – bring your own towel (like one of these amazing Tesalate towels) so you don’t have to rent one!

The beach at the Dead Sea Spa hotel is actually quite nice, although we didn’t see anyone hanging out on it. Everyone was hanging out right at the shore of the Dead Sea. Along the shoreline there were showers, big troughs full of Dead Sea mud, and a number of benches for putting your stuff down.

Once you’re had your fill of the salty water, the pool area is a lovely place to hang out for the day. There are two great kids pool, a waterslide, a lap pool and larger swimming pool. The food at the restaurants is a bit overpriced and not incredible, but unfortunately there isn’t another option if you get hungry. My suggestion is to just grab a pizza or some French fries from the pool bar!

*Expert tip – pick up some snacks ahead of time and stash them in your vehicle. You won’t be able to bring them into the resort (they actually put your bags through a bag scan at the entrance!), but you can head out to the vehicle at any point during the day for a small snack break, just show your wrist band on the way back in. We took turns doing this and just ran the air conditioning for a few minutes while we snacked in the car! 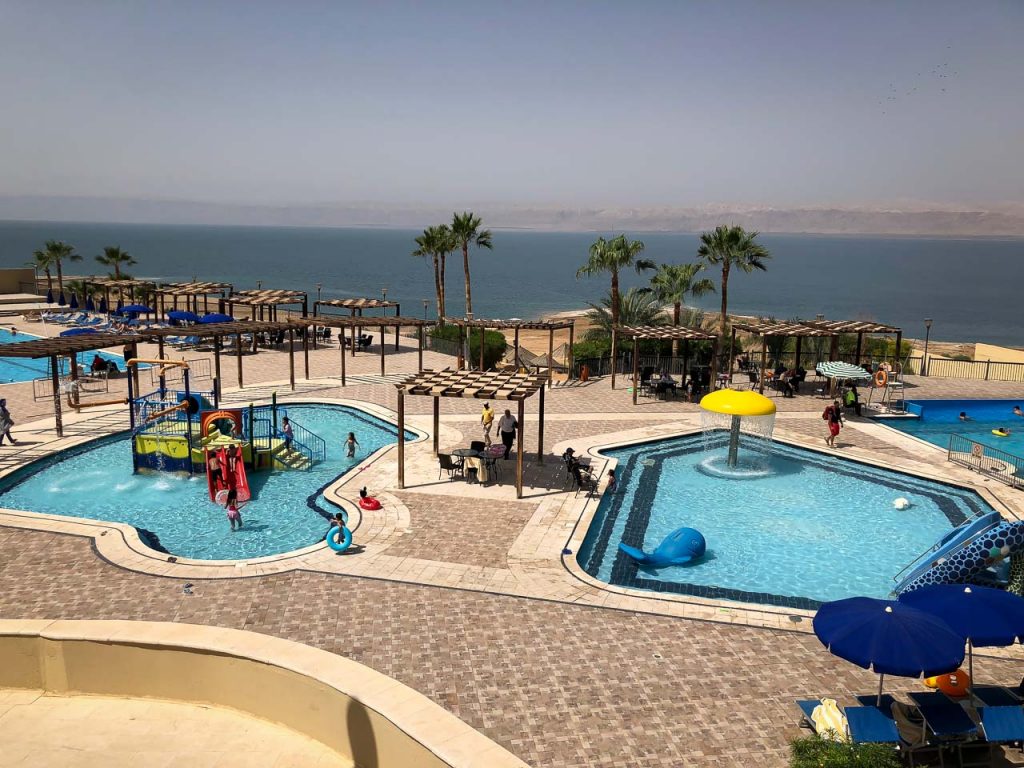 3. Spend The Night At One Of The Dead Sea Resorts

If you have the time, the most cost-effective way to see the Dead Sea in Jordan is to spend the night at one of the sea-side resorts. There are plenty to choose from ranging from the 4-star Dead Sea Spa Hotel to the luxury Kempinski Hotel Ishtar Dead Sea.

This is by far the best value for money at the Dead Sea. The facilities are clean and in good condition. It’s not a fancy hotel, but it’s still a nice hotel and very much up to Western Standards. Rooms can frequently be found for around 50JD ($100 CAD) per night (for 2 people) with breakfast included. This is essentially the cost of 2 day-passes here, or a single day pass at some of the other resorts.

When you’re budgeting, make sure to include extra $$ for meals at the resort since you can’t bring in your own food.

Find out what it costs to spend the night at the Dead Sea Spa Hotel.

The Movenpick is a luxury resort on the shores of the Dead Sea with a FREE kid’s activity centre (woohoo!!) for children ages 4-12. The HUGE benefit to the kid’s club is that you can drop the kids off and enjoy a bit of floating in the Dead Sea without your children screaming or crying about the stinging salt in their eyes.

The Kempinski Hotel is the most luxurious on the Jordanian side of the Dead Sea. It doesn’t offer a day pass, which means it may not be as busy as many of the other resorts, which is a definitely advantage! The pools are gorgeous and the grounds are beautiful, it truly is a luxury resort!

Find out what it costs to spend the night at the Kempinski Hotel Ishtar Dead Sea.

What’s It Really Like To Visit The Dead Sea With Kids?

The Dead Sea was our very last stop on our Jordan itinerary. We woke up early in Petra (Uum Sayhoun), then drove 3 hours to the Dead Sea Spa Hotel. By the time we arrived it was starting to get warm outside and we were ready to do some swimming! After claiming a few shaded lounge chairs we wandered our way down to the edge of the Dead Sea.

Having previously visited the also-very-salty Aral Sea, our girls had a pretty good idea of what to expect when they stepped into the Dead Sea. As I mentioned earlier, the Dead Sea is salty!! This doesn’t seem to pose a problem for adults, but for young kids it’s not the most enjoyable thing to experience. Any little scratches, scrapes or chaffing on the skin will burn like CRAZY when they touch the water. Both girls did a thorough once-over of their legs and arms before deciding it was safe for them to enter the water.

At first, everything was fine. Our friend Megan was prepped and ready to take our photo because I knew the kids wouldn’t last long! Kacela made it up to her ankles, then her knees, and it was all going well. Then she suddenly started freaking out saying her vagina was stinging! She tried to clamber on my lap to get her lady parts up out of the water. After a few minutes the stinging subsided and we were able to get a couple decent pictures without a panicking child! As soon as the pictures were taken, both girls were out of the water as fast as possible, removing any trace of salt in the fresh-water showers. They were not participating for “the experience”, they were simply doing it to appease their parents!

Randy & I floated for a few more minutes before getting out as well. However, I wasn’t done yet!

There were large vats of “Dead Sea mud” set up along the shore, and I convinced Calais and Alexis (one of our friends) to join me in slathering ourselves up into mud monsters. The mud stung our legs a bit, however the sensation slowly decreased as we became a bit more accustomed to it. We let it dry on our bodies before rinsing off in the showers and spraying mud everywhere! I’m not sure if it did anything to help my skin, but it felt smooth after rinsing it off!

The total amount of time spent on the shore of the Dead Sea was about 20min, but that was enough! Once everyone was rinsed off, we put our shoes back on to walk back up to the pool. We spent the rest of the day swimming in the (not-salty) water, relaxing in the lounge chairs, and eating pizza and ice cream from the pool-bar. If you ask the girls their favourite part of the day, it was definitely the ice cream! 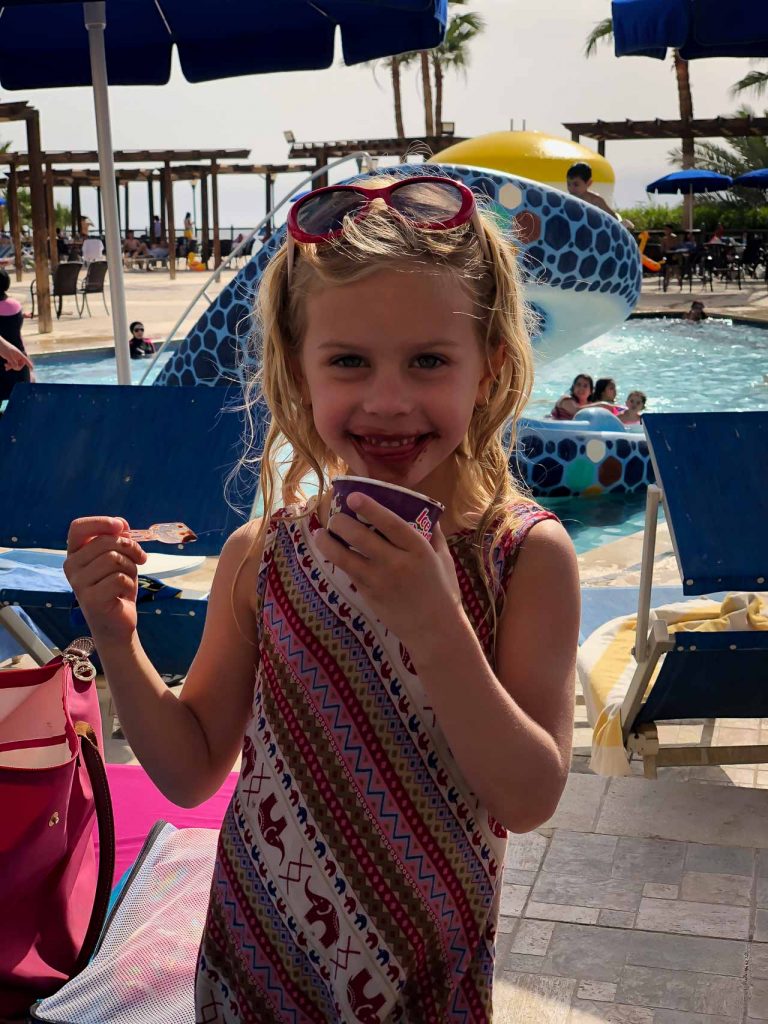 Tips For Visiting The Dead Sea With Kids

Don’t forget to PIN ME for later!! 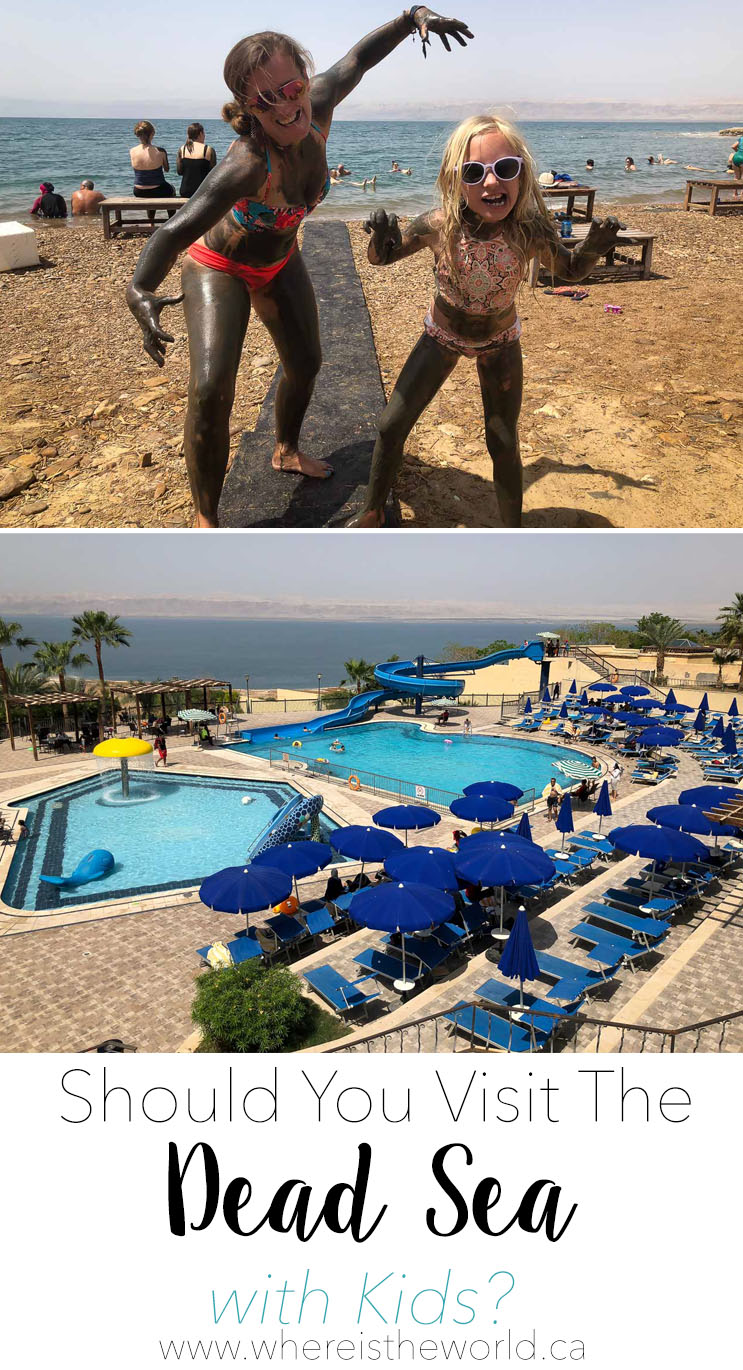 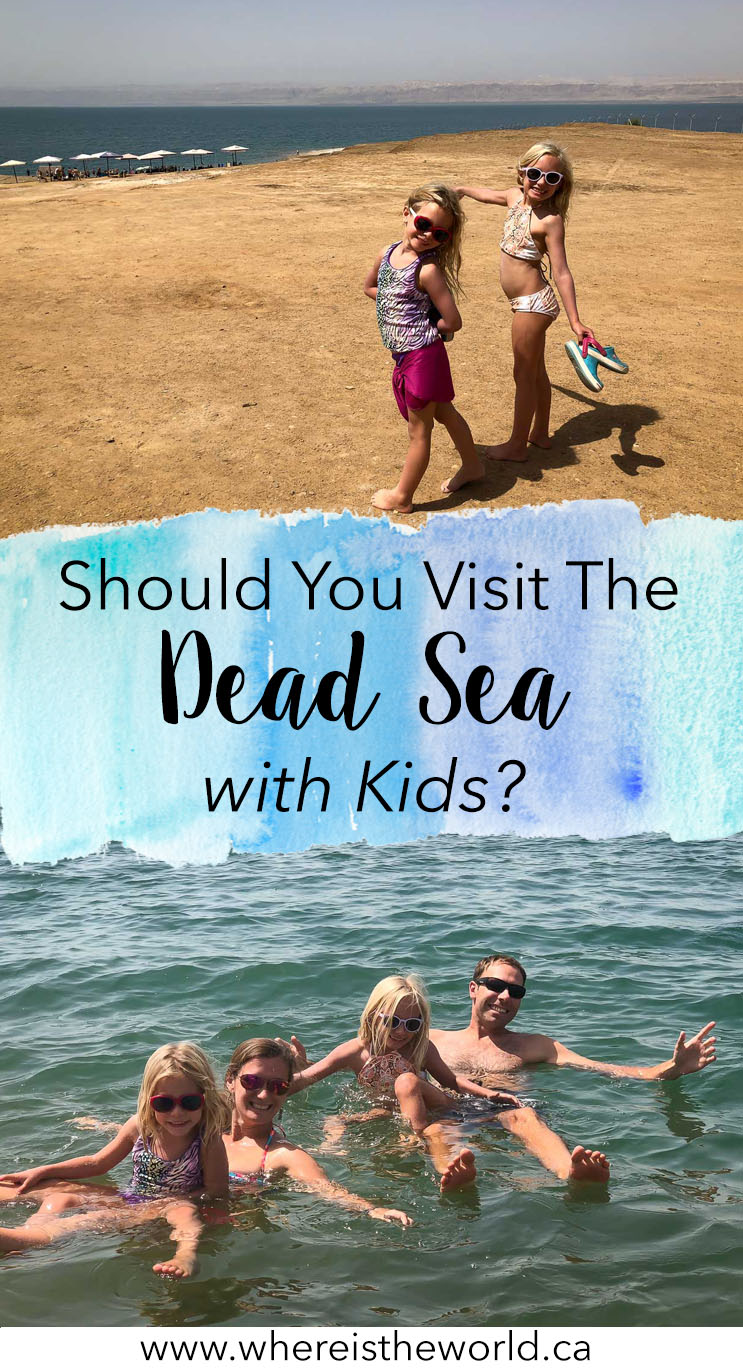 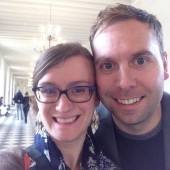 Reflections on A Year Around The World Hoi An with Kids